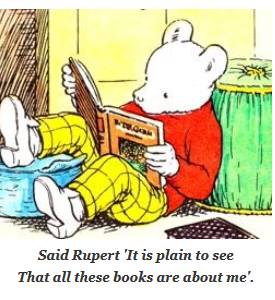 Rupert story strips have appeared regularly in the Daily Express since 8th November 1920. Many Rupert books and magazines have also appeared since 1920. The first were four books published by Nelson and these were reprinted as facsimilies in 2002.

Other books published in the 1920's and 1930's featured reprints of the early Mary Tourtel newspaper stories in black and white. These include Rupert Little Bear Series, four Monster Rupert books and a series of 46 books called Little Bear Library. The original series of these had black images on the covers and a later set of 18 published in the 1970's featured coloured covers. The Rupert annuals started in 1936 and continue to this day, and a set of 50 Adventure Series was published between 1948 and 1963.

There have been many other Rupert books published since as well as a number of different Rupert comic series in the 1980's. Rupert has also been published in the Netherlands since the 1930's both in newspaper and book form. He is known there as Bruintje Beer. Full details of all Rupert publications are listed in the New Rupert Index, which is now out of print.