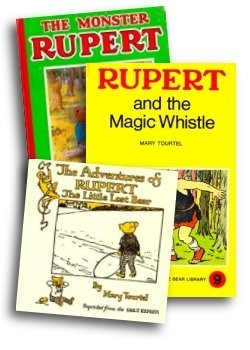 The first Rupert book, printed by Nelson was the Adventures of Rupert, the Little Lost Bear.

The Little Bear Library series of 46 books was produced in the 1920's and 1930's with black images on the yellow covers. In the 1970's 18 of these were reproduced, again with yellow covers, but these had a coloured picture on the front instead of the black images.

The 4 original "Monster Rupert" series were produced in the 1930's. Later "Monster Rupert" books were issued in the late 1940's. These were not reproductions as they had different stories than the original 4 but all used Mary Tourtel stories.