Rupert in the Express October 2017 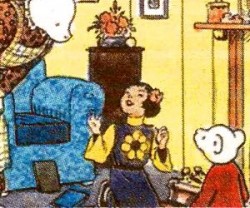 A new story, Rupert and the Hearthrug started in the Daily Express on 7th October and is an Alfred Bestall original that, to date, has appeared only in the 1961 Rupert Annual, so this is the first appearance of the story in the daily paper.

With Tiger Lily offering a Chinese carpet to Mrs Bear, there are hints of a magical adventure.

Rupert and Lion Rock concluded on Friday 6th October after 50 episodes and featured Rupert and Rollo being spirited off by to foreign parts on a boat crewed by some baddies on a treasure hunt.  Fortunately Rupert and Rollo and the treasure are rescued by the Admiral and Sailor Sam, and then head back to Nutwood to tell their story to Rupert’s Mummy.