Rupert in the Express November 2017 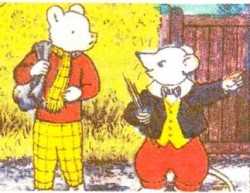 Rupert and the Dragon Pills adventure started in the Express on Wednesday 8th November with Rupert tidying up after his firework party, so a seasonal tale is promised. This Alfred Bestall story first featured in the Daily Express in 1949 and was later reprinted in the 1954 Rupert Annual. A slightly shortened reprint did appear in the paper in 2002 but it will be a new story to many new readers.

Rupert and the Hearthrug finished after 32 episodes on 7th November after adventures involving a magic carpet supplied for Rupert’s mother by Tigerlily. Edward Trunk and the Guides also featured and it is nice to see this story finally in print in the newspaper as it has only previously appeared in the 1961 Rupert Annual which was never reprinted as a facsimile.