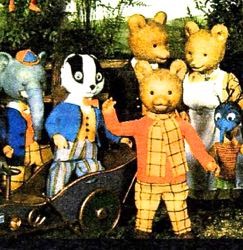 Happy days were recalled in the Sunday Times and Mail on Sunday on 20th August 2017 when this clip was featured, reminding us that Rupert's first television outing was in 1970. The Adventures of Rupert Bear ended on ITV on 24th August 1977.
Wish they wouldn't describe our ursine chum as a 'teddy' in a 'cartoon strip' though!