Rupert in the Express December 2017 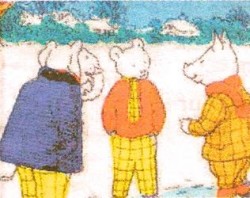 story commenced in the Daily Express on Wednesday 20th December.Â

The opening episode has Nutwood in the grip of winter and Rupert and his chums writing their present wish lists to Santa Claus. Â It all bodes well for a traditional Christmas adventure.

The story was written and illustrated by Alfred Bestall, and first appeared in black and white in the Express in December 1944, and was then later reprinted in full colour in the Rupert Annual for 1945.

Rupert and the Dragon Pills,

ended after 42 episodes on Tuesday 19th December. The story which started with Rupert tidying up after his bonfire party progresses to an adventure featuring Pong-Ping´s pet dragon that goes missing.Â  A visit to China chasing the runaway ends happily when Rupert and the pet are both returned to Nutwood safely inside a special rocket.Â