Rupert in the Express July 2017 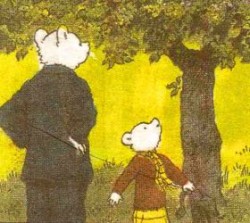 Rupert and the Young Imp story started on 23rd July with Rupert and Mr Bear contemplating their apple crop. A visit from Uncle Bruno then promises adventure. 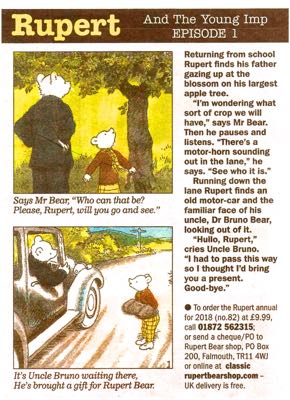 This story by Alfred Bestall first appeared in the Daily Express in black and white in 1947 and then in colour in the 1949 Rupert Annual. It was further reprinted in colour in the Sunday Express Magazine in 1983, and the daily paper again in 2009.

Rupert and the Back Room Boy ended on Saturday 22nd July after 48 episodes with the strange happenings occurring in Nutwood’s woodland due to the activities of a rogue Imp of Spring being finally resolved by the intervention of Rupert.