Rupert in the Express June 2017 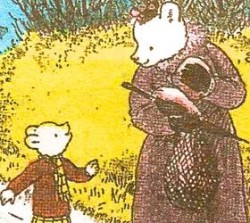 Rupert and the Back Room Boy started in the Express on Monday 5th June and there is promise of an adventure. After helping his Mummy with her shopping he is off to find his chums on Nutwood Common. This story by Alfred Bestall appeared in black and white in the Daily Express in 1950 and was later coloured and included in the 1954 Rupert Annual. Apart from a reprinting in the paper in 2002 it has not appeared elsewhere, so should be new to many readers.

Rupert and Rusty concluded happily with both returning safe and well after their pretend game turned out to be only too real. Granny, as well as the pet dog and cat seem enthralled by 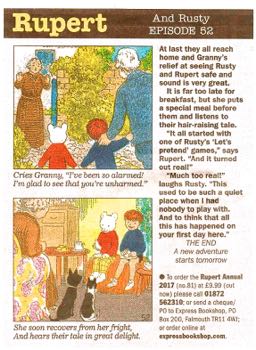 their telling of the hair-raising experience.