Rupert in the Express August 2017 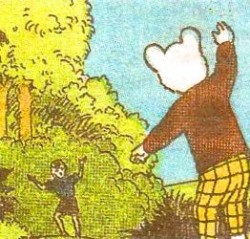 Rupert and the Lion Rock is a story by Alfred Bestall that commenced in the Express on Friday 19th August following Rupert and the Young Imp that had finished after 26 episodes the day before.

This new story originally appeared in the Daily Express in 1951 with a reprinting in the 1957 Rupert Annual in full colour. It was later reprinted in the paper between July and September 1986.

Rupert and the Young Imp story was truncated from the original 52 episodes to 26, which was the length of the reprinted version appearing in the paper in 2009. If you want to read the full story as it was originally written then get hold of a 1949 Rupert Annual or a facsimile reprint.