Rupert in the Express January 2018 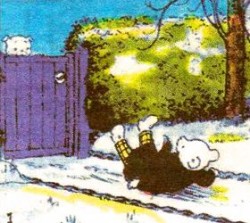 This Alfred Bestall story originally appeared in the daily paper from January to March 1943, when war time economy meant only one episode per day, so it took a long time for the adventure to reach a conclusion.

It was later reprinted in full colour in the 1945 Rupert Annual. 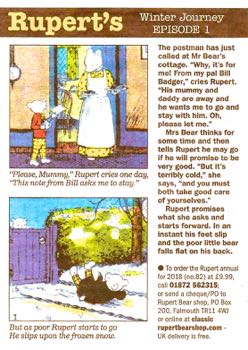 The opening episode looks to set a seasonal theme with Rupert slipping on the icy path on leaving his cottage.

Rupert´s Fairy Cycle concluded after 24 episodes on Saturday 13th January.Â The magic Fairy Cycle makes Rupert´s dreams come true, and he eventually ends up in China and has to return to Nutwood by the Mandarin´s iconic lift through the centre of the earth.

The newspaper story originally had 60 single panel episodes and only 48, (24 x 2), are used in this reprint.