Rupert in the Express February 2017 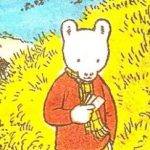 Rupert and the Winkybickies, story started in the Daily Express on Tuesday 21st February 2017.
It originally appeared in the paper in May 1965, and was further reprinted in the paper in 2006. The story was the last one written and drawn by Alfred Bestall before other artists took over.
The story appeared in colour in the 1977 Rupert Annual and had a further outing in the Rupert Weekly.

Rupert and the Igloo ended the day before after 44 episodes, and was a snowy seasonal adventure that featured two characters seldom seen on the Nutwood stage:
Algy’s Uncle Percy who appears in this image to have mislaid his pipe, and Dr Lion’s nurse who looks a bit scary but I am sure is very nice.