Rupert in the Express April 2017 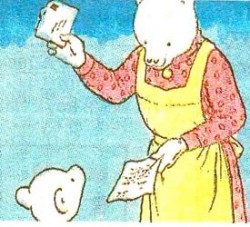 It was later reprinted in colour in the 1965 Rupert Annual from where this version is taken.  A further reprinting in the daily paper occurred in 2011.

A visit from the postman brings an invite for Rupert to go on holiday though his Mummy teases him about with whom and where.

Rupert and the Winkybickies story finished happily with Rupert managing to successfully complete his cereal card collection thanks to Pauline, one of the Guides.

This was the last original story written and drawn by Alfred Bestall for the Daily Express.