Mary Tourtel created Rupert in 1920 for the Daily Express

Mary Tourtel created Rupert in 1920 for the Daily Express who wished to compete with Teddy Tail who was very popular in the Daily Mail. Rupert was an instant success.

Born in Kent in 1874, Mary trained at art school and became a professional book illustrator. Her husband, Herbert, was a sub-editor of the Daily Express and it was he who arranged for Mary to create Rupert for the Express. The character she created was the "Little Lost Bear" who became Rupert. The little bear had baggier trousers than we now expect and was more overtly ursine than our Nutwood chum has now become. However, he was unmistakable from the outset - checked trousers and scarf, a small boy with a bear's head.

Between 1920 and 1935, Mary wrote and illustrated many Rupert stories, introducing many of the well-loved characters including Podgy Pig and Bill Badger. During the 1930's, Mary began to find the Rupert work too much for her as her eyesight was deteriorating, and a replacement was sought (and found, in Alfred Bestall). Mary Tourtel spent much of her working life in the town of Canterbury and continued to take a keen interest in Rupert right up to her death in 1948. 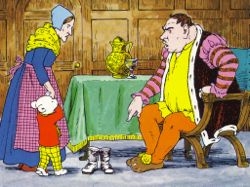