Alfred Edmeades Bestall took over from Mary Tourtel, Rupert's creator. He was born in Mandalay, Burma on December 14th 1892, the son of Methodist missionaries. He attended Rydal school in Colwyn Bay, which gave him a love of the Welsh countryside and where he obtained a scholarship to the Birmingham Central School (Now College) of Art. In 1914, for but a year, he attended the LCC Central School of Art, volunteering in 1915 to serve in the British Army. He spent much of 1915 in Flanders. After the war, he returned to the LCC Central School of Art. From 1922, he spent some years as a freelance illustrator, contributing to such periodicals as Punch and Tatler and illustrating over 50 books. Many of these were for children, including The Boy Next Door and The Play's the Thing , both by Enid Blyton, along with Myths and Legends of Many Lands and Spanish Goldfish in 1935. After the retirement in 1935 of Rupert's originator Mary Tourtel, Alfred Bestall wrote and illustrated his first Rupert story, Rupert, Algy and the Smugglers, at the age of 42.

Though he had illustrated many stories, he had never before both written and illustrated them. From that first story, the enchantment was there, and still delights us over half a century later. He was to continue as Rupert author and illustrator for the next thirty years.

Out of respect for Mary Tourtel, Alfred Bestall did not sign his Rupert artwork in her lifetime. After she died in 1948, he felt free to sign his work. ?The first such story was Rupert and Ting-Ling , which ran from 27th May to 21st July, 1948.

Later that year, the initial B was to be found in the 1948 Annual. Stories specially written for the Annuals were now signed, starting with Rupert and the Twins and Rupert and Pong-Ping's 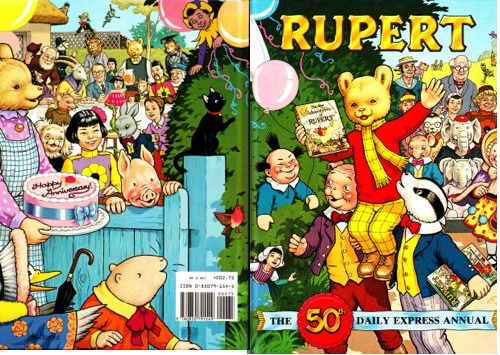 Party, which both featured in the 1949 Annual. On the available evidence, Alfred wrote and illustrated at least 273 Rupert stories, which constitute almost one half of the total Rupert stories ever written. 224 were published first as strips in the Daily Express running from 28th June, 1935 to 22nd July, 1965. ? 40 were specially written for Annuals and at least 7 appeared first in the Adventure series. Two appeared in the 1938 and 1939 Boys and Girls books.

Bestall drew Rupert for the Express newspaper until 1965. After this he still contributed to the Rupert Annual for a number of years.

In 1985, Alfred Bestall was awarded the MBE. On his 93rd birthday, he received the following telemessage from the Prince of Wales: "I have heard that you were sadly unable to receive your MBE from the Queen recently. I wanted to send you my congratulations on your award and to wish you a very happy birthday with many happy returns. As a child I well remember your marvellous illustrations of Rupert Bear". He spent that 93rd birthday in hospital at Caernarvon. Soon after, he was transferred to Wern Nursing Home, where he died peacefully on 15th January, 1986.

By a happy chance, the Daily Express had asked John Harrold, then the primary Rupert artist, to incorporate Alfred Bestall's portrait, surrounded by Nutwood characters, on the cover of the 1985 Annual. This commemorated the 65th anniversary of the first Rupert story by Mary Tourtel, the 50th Rupert Annual, and the outstanding contribution which he had made to the enchanted and enchanting world of Nutwood. Alfred appears on the rear of the cover.

Alfred Bestall's biography has now been written (in 2003) by his niece and god-daughter, Caroline Bott.

Published by Harry Potter's publishers, Bloomsbury. the book is full of Alfred's life, thoughts and artwork and is a "must" for Followers everywhere.