Rupert in the Express March 2018 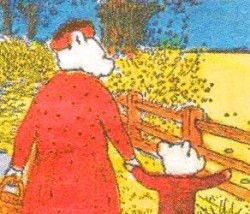 Rupert and the Flying Bottle, an early Alfred Bestall story, started in the Daily Express on Friday 9th March 2018. It originally appeared in the daily paper in September 1936, was then reprinted in black, white and red in the 1937 Rupert Annual, and then later appeared in the Express in colour in October 2010.

This adventure, which was originally featured in the paper in the autumn of 1937, starts with Rupert off to pick mushrooms. Let us hope he knows how to identify the dangerous ones, as traditional wild Horse/Wood mushrooms, which are used extensively in cooking, are normally a summer/autumn variety, and are not found in the spring.

Rupert and the Snow Machine concluded after 26 episodes on Thursday 8th March with the chums enjoying the seasonal snowy weather. We wonder if the Professor´s snow machine was responsible for the extreme weather that the UK experienced while this adventure unfolded.