Rupert in the Express September 2018

The story Rupert and Septimus commenced in the Daily Express on Monday 3rd September at the conclusion of Rupert, Algy and the Smugglers.

Rupert has an early encounter with a stranger while out on an errand for his Mummy.

This Alfred Bestall story first appeared in the Express in black and white in the summer of 1963 and was later reprinted in colour in the 1977 Rupert Annual.  There have been two further appearances of the story in more recent Rupert comics.

Rupert, Algy and the Smugglers concluded on Sunday 2nd September after 54 episodes with the smugglers being handed over to justice.  This was Alfred Bestall’s first story in the Express and it sets the tone for happy endings. 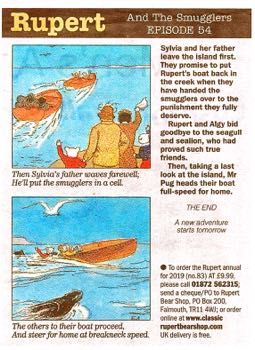