Rupert in the Express January 2019

Rupert and Young Kevin, an Alfred Bestall story, started in the Express on Monday 14th January.

It originally appeared as Rupert and Kevin in the Daily Express in January 1965 and was later re-titled when reprinted in colour in the 1976 Rupert Annual.

The story commences with Rupert leaving home to go to school but he soon meets up with Bill Badger and the Foxes on Nutwood Common, so there is a feeling that an adventure looms.

Rupert’s Odd Party finished after 40 episodes in a story that featured adventures with an animated Chinese doll that causes mischief at Rupert’s Christmas party.  He seems innocent enough now sitting in Rosalie’s pram but Rupert wonders if he might come to life again in the future. 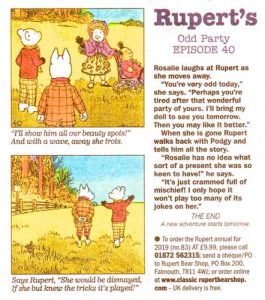