Rupert in the Express April 2019

Rupert and the April Fool started in the Daily Express on Monday 8th April 2019.  This reprint is of a John Harrold story (JH61) which originally appeared in 1992 in the paper with a subsequent reprinting in colour in the 1993 Rupert Annual.

Rupert and the Compass (B148)  concluded after 34 episodes on Sunday 7th April with Rupert enjoying a rare adventure with his chum Edward Trunk whose compass proves useful when they get lost in Nutwood. 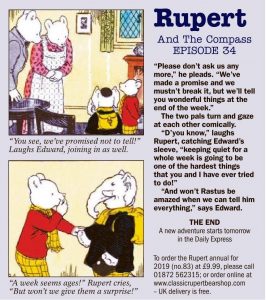