Rupert in the Express November 2016 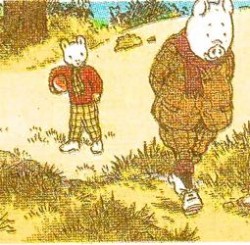 Rupert and the Toy Scout,

a new adventure, commenced in the Daily Express on Saturday 26th November.
This Alfred Bestall story originally appeared in the daily paper in November 1951 with a later full colour reprinting in the Rupert Annual for 1959.

Rupert and the New Bonnet finished after 30 episodes the day before, with Bingo and his experimenting with home made fireworks ending without too much disruption in Nutwood, though Mrs Bear´s basket seems lucky to survive.