Rupert in the Express June 2019

Rupert and the Missing Pieces story opened on Monday 3rd June and features Girl Guides Beryl and Janet who hint of a mystery that needs solving.

The story first appeared, specially written for the 1953 Rupert Annual and this is the first appearance in the Daily Express.

Rupert and the Lucky Man finished on Sunday 2nd June after 26 episodes and the “Lucky Man” was a paper fold figure, giving Alfred Bestall the chance to incorporate origami into the story.

Rupert also encounters Rastus, Peter and the Pedlar, so a number of old occasional chums are featured in the story. 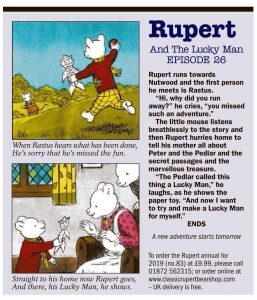