Rupert in Mysteryland, an early Alfred Bestall story, started on Monday 1st July.  Originally appearing in the Daily Express from 5th January 1938 it was later reprinted in October/November 2003 and also appeared in the Sunday Express in 1986.  It also featured in the 1953 Rupert Annual and Adventure Book No.1.

The story commences with Rupert inviting his chums to a party.

Rupert and the Missing Pieces concluded on Sunday 30th June after an adventure featuring the Thee Guides, Snuffy and an Inventor who gets Rupert to try his new flying machine. 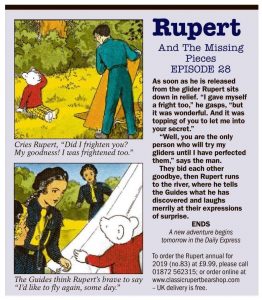