Rupert in the Express November 2020

Rupert and Morwenna story commenced on 1st November with the Bear family meeting Morwenna on the train in episode 1, presumably heading for a winter seaside holiday. 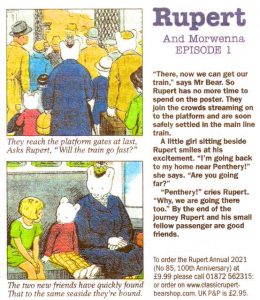 A text reference to “no more time to spend on the poster” indicates the start of the adventure has been cropped to cut out an earlier event and image.

This will be the fifth reprinting of the story since 1988, and is rather unseasonable as Bestall originally wrote it for inclusion in the newspaper as a summer story in 1952.

One wonders why the Express have missed the opportunity to reprint Rupert’s Birthday which would have been very topical and has only been reprinted once before.

Rupert and the Crystal ended on 31st October with the chums returning to Nutwood after being mystified by Rollo who had joked with them using a mysterious crystal ball which allegedly showed events happening.  It is another example of Bestall’s imaginative story telling genius.