Rupert in the Express Late January 2022

Rupert’s Adventures in the Snow, a seasonal story, started in the Daily Express on Wednesday 24th January 2022.

It is a very early adventure by Alfred Bestall which originally appeared in the paper in 1936.

We are not sure why Mummy Bear should now be referred to as “Mamma” in the couplet text.   Probably just a terminology change for the sake of change I suppose.

Nice to see that Rupert is now wearing his bright red jumper after the black one he wore in the previous Daily Express story. 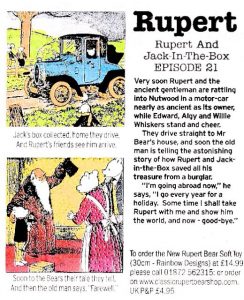 Rupert and Jack-in-The-Box finished on Sunday 23rd January with a ride home in a vintage motor-car.  I am sure I have seen its appearance in the annual London to Brighton veteran car rally.