Rupert in the Express January 2022

Rupert and the Jack-in-a-Box story commenced in the Daily Express on Monday 3rd January 2022.

It is a 1938 newspaper story that originally was entitled Rupert and a Jack-in-the-Box which then appeared in the 1939 Rupert Annual.  It was later produced in 2005 for the first time in colour by the Followers of Rupert.

It appears that Rupert must have received a black jumper for Christmas as he is depicted wearing one in the first episode, or perhaps it was just that his usual red one was in the wash. 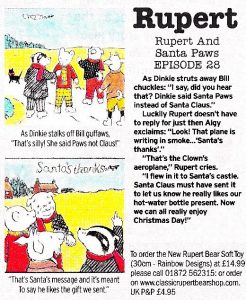 Rupert and Santa Paws concluded after 28 of the original 32 newspaper episodes, drawn by Jenny Kisler who has faithfully followed the recently retired Bestall’s illustrative style.  It is a seasonal story that ended as always with a happy return to Nutwood after adventures elsewhere.