The "The Beaney House of Art and Knowledge" in Canterbury has a wonderful Rupert Exhibition.

Art Society Lecturer (on, inter alia, Rupert the Anthropomophic Bear) has visited. This is what Howard has to say: 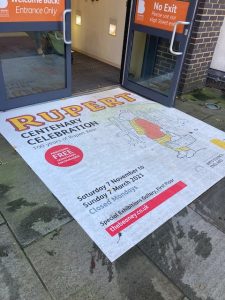 It was breathtaking to see the large collection of familiar endpaper artwork by Bestall, Cubie (a big surprise) and Harrold including the classic Bestall’s Frog Song endpaper –  possibly the biggest collection seen for years. When the exhibits were at the Heritage Museum they were constantly rotated and never seen together. Herbert Tourtel’s diary and book, The Coming of Ragnarok, are on show for the first time since they were found in Melbourne, Australia – they had been erroneous taken out there by George Caldwell, one of Mary’s brothers, when he emigrated there to farm. They were discovered there in the 1990s and bought by Canterbury City Museums. The diary, which I have transcribed, is a fascinating insight covering three years from 1898 to 1900. This is the period that Herbert met Mary and his romance with her along with the struggle for existence as a poet until he got a job with the new Daily Express in Autumn 1900. Herbert had two volumes of poems published, The Coming of Ragnarok in 1895 is the only copy existing outside the British Library and is inscribed to Mary by Herbert with a quote from Shakespeare. The other is a paperback edition called the Child of the Cliffs, also 1895 which is in the Priaulx Library in Guernsey. 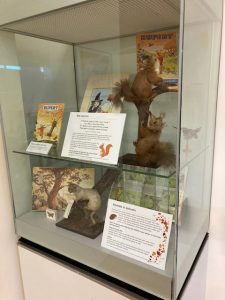 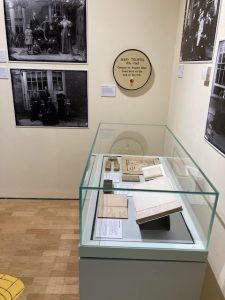 The star of the exhibition is Mary Tourtel’s first sighting of Rupert in a set of printed handkerchiefs for Sefton Fabrics of Belfast in 1919.  This sampler book was to be used by salesmen to sell the designs.  This sampler was found in the attic at 11 Cromwell Road, Canterbury, the former home of Samuel Jnr her brother in the 1990s when it was being cleared by local undertakers. Sefton never produced the handkerchiefs as it was bought out and the designs dropped. The cover illustration is a delight and very recognisable with an early Edward Trunk, the foxes and rabbits. 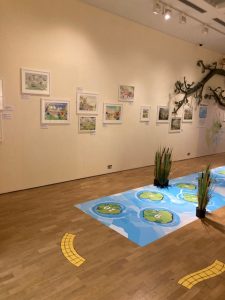 Annuals, toys, Royal Doulton figures and the Frog Song are all there in an exhibition that is an Aladdin’s Cave and open until Sunday 7th March (closed Mondays) but with this current Pandemic check first before you go  01227 862162 or thebeaney.co.uk. I will be giving Gallery Tours on to be announced days. It really is not to be missed!

The Exhibition sounds very worth a visit!